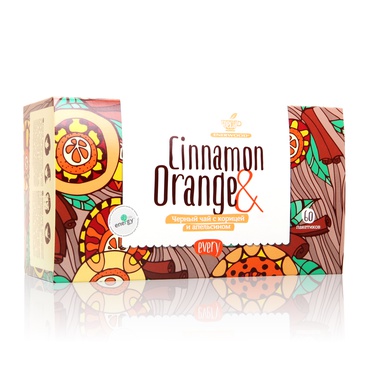 Black tea with cinnamon and orange

Rich, astringent taste and fascinating aroma of the tea will give you a warm homey feeling wherever you are. Classic black tea taste is combined with rich tangy cinnamon and a soft citrus aftertaste of sweet orange. Such a blend gives a good feeling, boosting mood regardless of anything.

Rich fragrance of Every Cinnamon&Orange blend fascinates with its delicate combination of fragrant spices – clove, cinnamon and allspice, which reveal a brand new taste of traditional black tea. On top of this flavorful composition there is a slightly sweet and sour aftertaste of candied orange. This taste will wrap you up with summery warmth of a bright eastern fairy tale.

Indian and Ceylon black tea – give the drink a bright color, rich aroma and tangy hints. Has  atonic effect and helps to fight fatigue.

Fireweed/willowherb – it reveals the depth of a full-bodied taste of the tea, filling it with a herby floral aroma. It not only boosts energy, but also increases protective functions of body.

Cinnamon – it not only fascinates with its unforgettable aroma, but also contains a lot of valuable microelements (calcium, iron, magnesium), it is also a source of cellulose and antioxidants.

Clove – another aromatic spice, which combines an ancient distinguished fragrance with a unique taste and medicinal qualities.

Licorice – makes the taste of the tea deeper and richer and increases qualities of other ingredients. Contains glycerol acid, which is a substance with a unique bio-activity. In traditional Chinese medicine it is widely used for its rejuvenative qualities. It not only boosts immune system, but also has an anti-inflammatory and anti-allergic effects.

Allspice – gives a unique combination of a rich taste and a pleasant fragrance, stimulating metabolic processes and activating protective functions of body and gives an energy boost.

Reishi mushroom - It is a unique plant adaptogen, having no alternatives, it is also a natural immune booster, healthful qualities of which are well known since ancient times. It is widely used for anti-stress and medicinal purposes in eastern countries. It also provides production of interferon, which is a type of protein, stimulating body protection and antibacterial functions.

Do not consume if intolerant to any of the ingredients.